Julia Peresild told about parting with Alexey Uchitel: “We have not been together for a sufficient number of years”

Yesterday, the YouTube channel “Tell Gordeeva” published the first interview of 37-year-old Yulia Peresild after returning from space. The release turned out to be truly resonant: in less than a day, it collected almost five thousand dislikes (there are a thousand fewer positive reactions at the time of publication of this material). In this interview, Yulia spoke not only about her impressions of the space trip, but also answered the criticism of Internet users about her flight, and also opened up about her personal life.

So, Peresild confirmed rumors about parting with the father of her two daughters Alexei Uchitel, which had been in the press for a long time. When the host Katerina Gordeeva was asked if Yulia had quarreled with Alexei because he was categorically against her flight into space, the actress explained how their relationship with the famous filmmaker is developing today:

Why did we have to swear? We are people who have not been together for a sufficient number of years. Swear like who? We fought before, when there was a reason. We are very friendly, we have a very good relationship. Each already has its own story. We have wonderful children. Who could dissuade me? For what reason? And most importantly, by what right? Do not really understand.

Recall that the relationship between Julia Peresild and Alexei Uchitel, who is 33 years older than her, began many years ago. For a long time, the couple hid their romance, because Alexey was married to Kira Saksaganskaya. The filmmaker is still not officially divorced from Saksaganskaya. From this marriage, the Teacher has an adult son, Ilya, who followed in his footsteps. In a recent interview, Peresild admitted that the relationship with a married man became a real test for her: the actress said that she suffered from remorse, but still could not do anything about her feelings for the Teacher.

Alexey Uchitel and Julia Peresild with their daughters

In a new interview, Julia also admitted that she quite often falls in love (recall that earlier the actress was even credited with an affair with billionaire Roman Abramovich), but the last time she experienced really strong feelings was in a relationship with Alexei Uchitel. The actress also said that she dreamed of a real family many times, but she could not take the first step towards this herself and always waited for the initiative from the man:

It’s this courage that makes me take the next steps, as if I’m not in me. There are some prejudices that as if a man should do it after all. These prejudices, even in me, so independent and completely denying the difference between the sexes as such, are still present.

With humor, the actress also dispelled rumors that she allegedly achieved many merits in the profession, as well as the opportunity to fly into space “through bed”:

Through the bed? If you read this to yourself, the image of some courtesan or something like that immediately arises. Maybe I would like to, but too much brain, and it gets in the way. Because no matter what, you kind of … you think, “Okay, oh no. Thank you.”

Peresild also answered the Internet users who harshly criticize their flight into space with Klim Shipenko. The hate wave hit the actress after the release on YouTube of an interview with Alexei Pivovarov with one of the main Russian popularizers of cosmonautics, Alexander Khokhlov. In this conversation, he said that it was because of the business trip of Yulia Peresild and Klim Shipenko that cosmonaut Andrei Babkin, who had dreamed of this all his career, did not fly into space.

Instead of us, the cosmonauts who were supposed to fly really did not fly. I think Sergei Korsakov and Dmitry Petelin should have flown. No Andrey Babkin was supposed to fly. It is I who immediately oppose Alexei Pivovarova with his transfer, because this is all, of course, a lie. There are completely different problems, because of which someone did not fly. And the popularizer of space, who talked so actively about it, told a lie,

Yulia also clarified that before her flight she had dealt with cosmonauts Korsakov and Petelin, and admitted that they did not hold any grudge against her and were very supportive of them and Klim before the start:

Yes, Serezha Korsakov and Dima Petelin were supposed to fly. These were the first people I met, because I ran to them and said: “I am Yulia, I understand that this is a very difficult situation for you, difficult and everything else. I mean, don't excuse me, but I understand you.” In general, Serezha and I became very friends, and he was with us all the trainings, he came to all our rehearsals. We also have good relations with Dima. Although I understand everything, I am very careful about when they fly.

Peresild also admitted that she cried several times on the ISS: once she did it according to the script of the film “Challenge”, and the other because of emotions about the situation, which she did not talk about in an interview. Julia clarified that it is almost impossible to cry in zero gravity, and also described this process in detail:

First, such a film forms on the eye, you directly see these tears, they are around the eye. When I started crying in my life, then I looked in the mirror and thought: “Oh, how are they? Like this?” At first they are just in the eye. Then, when a lot of them accumulate, they begin to smear over the eye socket. I shed many tears. And then there was this moment in the frame when we had such a scene. I'm crying, crying, you can't see. One can only see that something is getting wet around.

In an interview, Julia Peresild also admitted that she would very much like to return to space, but would still refuse such an offer if she received it again. The actress also clarified that all the rumors about the loss of footage are not clear by whom the widespread fake. 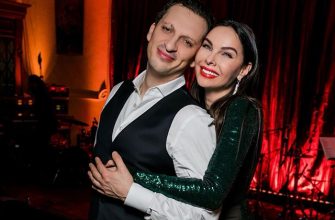 Zhanna Shamalova spoke about the infidelities of the ex-wife of Kirill Shamalov, who is considered “the ex-son-in-law of Vladimir Putin”
Kirill and Zhanna Shamalov After an interview with
02k.

“Is it true that being rude is in our blood?”
Alexey Pivovarov Today, 47-year-old journalist Aleksey
0547

Artemy Panarin threw the glove at the Canadian hockey player because of his words about Russia. The network launched a flash mob in support of Panarin
Artemy Panarin Yesterday, during the NHL match between
0395